John is ordered to COME by one of the four creatures with the voice of thunder. The interpretation of the opening of one of the seven seals varies. In chapter 5 is only spoken of one scroll with seven seals. So if only one seal is broken here, how then can one read what is inside the scroll? Well, it is not important to understand. We shall see what each of the seals mean and that is important.
The first seal gives a white horse with a rider who had a bow and a crown. White is usual related to clearness and to Jesus Christ. So what is its meaning? He went out conquering. That is victory, yet no disaster. So it is in the beginning of the Great Tribulation, I would say chapter seven when the two witnesses and the 144.000 sealed one will proclaim the Kingdom of God. The time in which people get the opportunity to choose for God and against evil. Conquering over evil, conquering over satan and getting into the Kingdom of God.
The bow is a symbol of divine victories, Isaiah 41:2; Habakkuk 3:9, 13:

The crown is authority, power and dignity like the crown of a king. Meaning that the proclamation of the Kingdom of God will have its victories. There will be people who accept the proclamations, while other still will refuse and follow what they themselves like.

The second seal is the start of the judgment of God over people who reject Him. Red is the color of danger, war and bloodshed. The peace on earth is removed and the time of wars between nations starts. Also man against man, betray one another, and hate one another, you will be hated by all nations for my name's sake (Mat. 24:9-10).

The third seal with the black horse. Black represents death. The balance was used for the purpose of measuring out grain. A quart of wheat will be sold for a denarius. A quart of wheat was the daily consumption of man. A denarius was the average day's pay of man. Now the complete payment is necessary to buy the food for one person, and the food for one person is now for the complete family. There is no money to pay for rent and energy. Barley was the food of poor people, it was cheaper than grain. Still there was no harm done to oil for baking and drinking wine.

The fourth seal with the pale horse. Pale represents the pallor of death, the ashes of a cremated person. The terror increases due to death by famine, killing by the sword, pestilence and wild beasts. People who died here go to Hades or inferno, not to paradise! There end destiny is the lake of fire. There is however a bit of hope, it is limited to a fourth of the earth. The wild beasts can be lions, snakes, vultures, etc.

The fifth seal states that the persons, who are killed for their faith and accepted the proclamation of the Kingdom of God in the Great Tribulation, receive a white rob and they have to wait until the end of the Great Tribulation. So I think these people are in paradise. The altar was the place were the animals were slaughtered, symbolizing the shedding of blood. 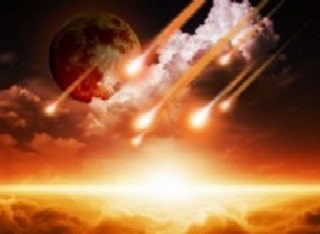 The sun shall be turned to darkness, and the moon to blood, before the great and terrible day of the LORD comes.
The sun and the moon are darkened, and the stars withdraw their shining.

The great earthquake let every mountain and island move from its place. The sun will no longer gives its light and recently will already have seen that the moon can take a red colour, so like blood. The stars of the sky fell to the earth. Lately we are seeing many comets falling on the earth. There give a bright light like a star when burned in the atmosphere. Is this present increasing falling a warning of God to mankind? Thinking of the many 5G satelites launched today and in the sky, I thinking God will let them fall to the earth and they will give a light like a star when burnt in the atmosphere.
Verse 14 is inline with Isaiah 34:2, 4

For the LORD is enraged against all the nations, and furious against all their host, he has doomed them, has given them over for slaughter. All the host of heaven shall rot away, and the skies roll up like a scroll. All their host shall fall, as leaves fall from the vine, like leaves falling from the fig tree.
Mat. 24:29 The sun will be darkened, and the moon will not give its light, and the stars will fall from heaven, and the powers of the heavens will be shaken.

Verse 14 John uses the Greek word hōs, which is used for comparisons, often translated "as it were," or "like." So John is not implying that the air itself is literally being "split apart," as if the atmosphere was being removed. Certain natural disasters can cause massive shockwaves of moving air and wind: the sky being "split apart." Seeing clouds racing due to storms, hurricanes, or pressure waves might fit this description as well.
In the anxious time, all people on earth flee to the caves and the mountains trying to hide themselves from this nature forces. Finally they recognizes that this is the wrath of God.
For the great day of their wrath has come, is that the Day of the Lord (Amos 5:18)? Then it will be at the end and final of the Great Tribulation. The seventh seal is in the chapters 8-11.