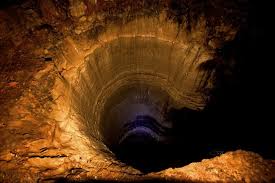 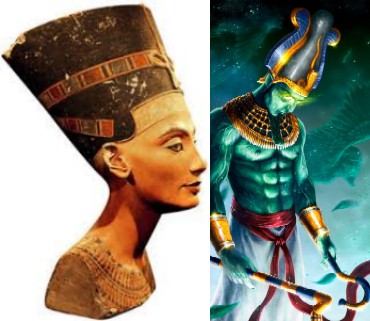 In chapter eight, the first fourth trumpets were blown with its plagues which affected the earth. Here the the last three trumpets are blown wit its plagues which affect directly men who are NOT sealed by the seal of God.
This is a very interesting chapter which one canNOT dismiss. We might have seen the films of STAR TREK and STAR WARS with its foreign creatures. Therefore one does not need to be surprised about the creatures who are described in this chapter. Also there is a lot on the internet about Hades, the caverns under the earth. Do not say that is rubbish, with all what is going on with Covid-19 we need to take things seriously. So continue watching and take it seriously, despite you might think it is above understanding. So let us start.
Verse 1 starts with I saw a star fallen from heaven to earth, and he was given the key of the shaft of the bottomless pit. I think we can take the star as symbolically, meaning the star is an angel of God, who goes from Heaven to earth, yes to the inner of the earth. Is what John sees the angel passing through the atmosphere of the earth, a crater is formed which gives access to Hades that is the shaft of the bottomless pit. If you search the internet, the shaft of the bottomless pit is at the North Pole and/or Antarctica. Do not say that is ridiculous, that are facts. Hitler already sent expeditions to locate the entrance to this pit. Some scientists tell that they located the entrance, heard strange sounds and saw creatures like the creatures with the enlarged triangular head seen in the pyramids in Egypt. Some have entered this caves and never returned.
He, the star or angel, opens the bottomless pit. The general (Jewish) believe is that Hades is in the inner of the earth and where the fallen angels (the sons of God) are locked (Genesis 6). Out of the intercourse of these sons of God, fallen angels, with the women on earth were born Nephilim, giant (in altitude) children (gibbor גיבור) of them. So God ended these intercourses and throw them in the pit. 2 Peter 2:4 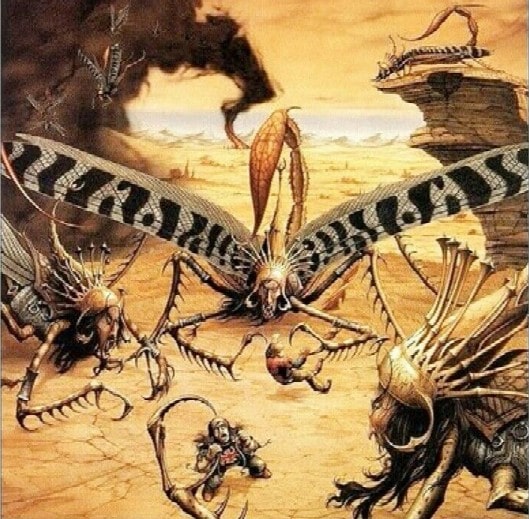 For if God did not spare the angels when they sinned, but cast them into hell (obysmo) and committed them to pits of nether gloom to be kept until the judgment.

That is in the opinion where (obysmo) they are kept until Revelation 9:2 and then they are set free.

The destructive forces of desert locusts are well known, as well as they huge amount are able to darken the sky (Joel 2:10). But here no earthly locusts are described, but locusts like scorpions with a sting. The prick of the sting is not deadly, as with earthly scorpions. The prick of these scorpions has a purpose to torture man (who has not the seal of God on their forehead) during five months. The pain is, however, so fierce that it is like the torture of a scorpion. But now one is not suffering for a 12-24 hours (like in the case when one is picked by a scorpion today) followed by death, but the torture will last without the relief of death. No wonder that people will search for death in order to be release from this horrible torture. It seems that suicide was not possible in those days, for in verse 6 states: "and death will fly from them". Woe, woe, woe them who live in those days and have the mark of the earthly powers (the Beast). Their teeth like lions' teeth is in accordance with Joel 1:6.
How they will look exactly we cannot image, since verse 7 says "appearance the locusts were like horses arrayed for battle". Background is Joel 2:1-4

Blow the trumpet in Zion; sound the alarm on my holy mountain! Let all the inhabitants of the land tremble, for the day of the LORD is coming, it is near, a day of darkness and gloom, a day of clouds and thick darkness! Like blackness there is spread upon the mountains a great and powerful people; their like has never been from of old, nor will be again after them through the years of all generations. Fire devours before them, and behind them a flame burns. The land is like the garden of Eden before them, but after them a desolate wilderness, and nothing escapes them. Their appearance is like the appearance of horses, and like war horses they run.

It matches with Joel because there it speaks "for the day of the LORD is coming" and here in Revelation we are at the final of the Great tribulation, the day of the Lord is coming. The locusts cannot be eradicated looking upon their sizes. Their appearances are like horses arrayed for battle with scales like iron breastplates. Remembering the middle ages, how knights had protected their horses with breastplates and iron shields, and we can images a bit. But let us reading along, these locusts appearing like horses had tails as scorpions and stings. At present we have a good idea how a dinosaur must have looked in the pre-historic times and from the animation film Jurassic Park. So this description must not surprise us and we can be certain that the description of these locusts in Revelation is accurately. And also REALLY WILL torture man on earth.

Verse 11 These creatures have a king over them, his name is in Hebrew is Abaddon, and in Greek he is called Apollyon. Abaddon means destruction, synonymously with Sheol or the underworld of death. Apollyon means the destroyer or abyss. So we can safely conclude: satan.

Verse 13 At the sixth trumpet, four angels were released, who were bound at the great river Euphrates. Considering that they were bound, we conclude that these angels were not angels of God, but angels of satan, who were bound by God until then, preventing them from doing evil.
The fifth trumpet brought pain but no death, the time to repent and stop the adoration of satan and turn to God. Due to their hardness and consisting to follow the Beast, this sixth trumpet brings death.
Verse 15 The four angels were released, clearly they are demonic angels and not the four angels in Revelation 7:1. These are evil angels who were bound by God until the exact hour determined by God to release them over the wicked men on earth. They were given the release by God and limited by God to kill one third of mankind on earth. Again it is a warning of God to mankind on earth to reject satan. God is showing His Power. However mankind rejects.
The number of the troops of cavalry of demonic host is inconceivable: twice ten thousand times ten thousand, so 200,000,000. Looking to the few millions of soldiers who were engaged in the Second World War to kill under the guidance of Hitler tenths of millions of Jews and people. We can without question imagine how an army of 200,000,000 is able to kill a third of mankind.
Many are the opinions that we should take these horses with lions' heads and tails like snakes, symbolically. But why should we? For it is God's revelation to John, which describes in human terms what he is seeing. From pre-historic excavations, we have a reasonable view of creature (dragons) which lived long ago, as well as the Psalms give Levitians. Also with the present animations we are shown similar creatures, especially in science fiction films (like Star Wars). Therefore, take this creature literally as described here in Revelation. These creatures, fallen angels, will be released by God on earth during the Great Tribulation and their mission is clearly to give pain and death to men and not their normal consumption of eaten any green growth or any tree, that is forbidden by God.
It is the fire, smoke and sulphur that comes out of the mouths of this creatures which inflicts pain and death upon mankind.

Despite this very clear warning of God and showing God's Almighty, the people (who remained) do not convert. They continue to worship the idols and the Anti-Christ. The idols who are liveless, made by human hands of gold, silver, bronze, stone and wood, which cannot either see, hear or walk. Mankind is blindly adoring the demons behind these idols.
What horror for mankind, despite the displaying of God's power, one is no longer able to convert to God.

NOW there is still time, God's Love is visible in the Lord Jesus Christ. And conversion to God is STILL possible, but for how long? Later it is too late, then God's wrath will be inflicted upon those who reject His Love (AGAPE) and God will show His Holiness and Justice. Then it will be revealed what really lives in the heart of man. Rejection now of God's Love in the Lord Jesus Christ by one, then later on during the Great Tribulation one will experience God's anger and wrath.

See Daniel 12. In the time we are living, we may certainly conclude that our knowledge about the time of the end is increasing, such as I hope by the explanations I am giving to clarify things.

Only John and the Lord God know the answers if it is written down and be found and revealed during the Great Tribulation. One thing is sure, it is NOT important for Christian believers, otherwise God would have written it down and would not have it sealed.